Snowball is a genetically altered hamster and the former friend of the Brain who was also the subject of gene splicing.

He is voiced by the late Roddy McDowall.

Snowball's tail is stubby and the same faded orange as his fur. He has jowls, pink eyes, and a large head similar to Brain's. His stomach, unlike the rest of his fur, is white.

He is highly intelligent due to the gene splicing and develops complex plans for taking over the world, though he will at times take Brain's ideas and implement them before he and Pinky are able to. Unlike Brain, Snowball clearly does not have good intentions at all. 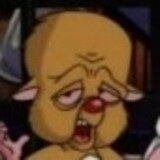 Add a photo to this gallery
Retrieved from "https://pinkyandthebrain.fandom.com/wiki/Snowball?oldid=6462"
Community content is available under CC-BY-SA unless otherwise noted.